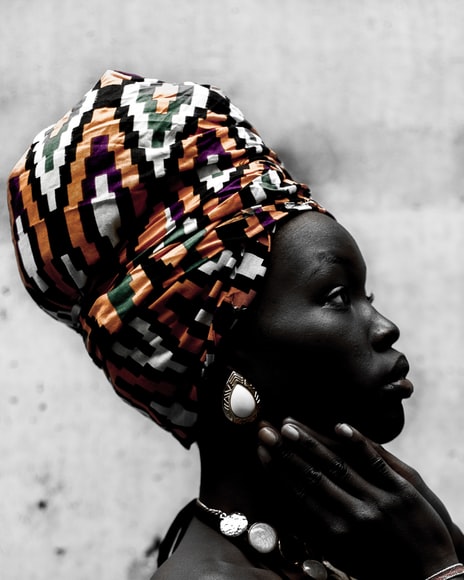 A Headwrap Revolution: The History of Headwraps Unwrapped Headwraps have been such a dynamic part of African and African American culture. The beautiful pieces of winding fabric gracing the tops of melanated women heads are more than just a fashion statement. Headwraps have been known to symbolize age, virtue, wealth, and at its worst, oppression.

As a cultural symbol, headwraps are a fitting accessory that has crowned the heads of many visionary women of color throughout biblical and world history.  I can be a little biased because that is one of the many reasons why I created Royalteewraps. Obviously, I am not the only one that has a deep spiritual connection, love, and

appreciation for headwraps.  Headwraps are so widely embraced worldwide that “National Headwrap Day” is celebrated on November 20th annually to commemorate its unique history for all of those who share an admiration for headwraps.

Here’s a look at the history and evolution of headwraps in our community: Head coveringsrred to as veils in the bible) were standard holy garments worn by women throughout the Old and New Testaments.  For example, Genesis 24:65 and Numbers 5:18, just to highlight a few.  However, in Paul’s epistle to the Corinthians, Paul explicitly stated why women in the faith should cover their heads when praying and/or prophesying (1 Corinthians 11:5).

Paul also warned the church about women who did not cover their heads and how they were left uncovered (vulnerable) because of the angels (1 Corinthians 11:10).

Today, Hebraic churches observance the practice of veiling.  Head coverings are a significant part of a woman’s modest apparel and are seen as a symbolic act of obedience, honor, and faith.

The History of Headwraps in Africa Originating in sub-Saharan Africa in the early 1700s, headwraps have long served different purposes; of course, depending on the tribe of the one wearing the covering. For example, the way a headwrap is tied can signify a woman’s marital status in Yoruba culture. On the other hand, for the Zulu tribe, head coverings are worn as a sign of respect. The color of headwraps signify spiritual and cultural meanings for all. Although various tribes in Africa wear headwraps, one thing remains the same: headwraps are a staple piece to commemorate sacred practices.  For example, the Asante (or Ashanti) people of Ghana in West Africa wear Kente cloth, handwoven silk, and cotton fabric. It is no longer only the privilege of royalty; anyone who can afford to buy Kente cloth can adorn themselves in the beautiful fabrics.

The most extravagant headwrap designs are showcased during wedding ceremonies.  Nigerian brides wear traditional Gele cloth, which is an artfully folded head tie.  Family and friends signify their relationship to the bride and groom by wearing “aso-ebi” — a Yoruba word that means family cloth.  Participants typically purchase the same fabric to match the bride and groom wardrobe.  Even men will sometimes make a cap in the same fabric as the wedding party.

This is one of the significant reasons why headwraps have remained such a cultural pillar in Africa, but in the U.S., the history is a bit darker and complicated.

The History of Headwraps in the U.S. During the Transatlantic Slave Trade, headwraps were one of the few cultural item’s slaves brought with them to the Americas. Headwraps functioned as a “uniform of rebellion.”  So, while head coverings were symbols of status and respect in Africa, white slave owners turned them into symbols of bondage and enslavement in the United States.

The initial oppression of the headwrap dictated America’s negative attitude towards “black hair” through the years. When restrictions are created to policewomen of color hair, such as the 1789 “Tigons Laws,” it comes as no surprise that women of color still face hair discrimination presently. Unfortunately, the end of slavery did not signal an end to the stereotype and attempt to diminish our beauty. Black women who worked for white families still had to cover their hair with a simple cloth, eventually leading to the “Black Mammy” stereotype. But by the Grace of God, we persevered and ultimately redefined the standard of beauty in the U.S.

The Rise of Headwraps in Mainstream Culture

Black women in America were wary of headwraps after experiencing negative stereotypes.  It wasn’t until the introduction to relaxers and protective styles in the early 20th century that women of color returned to headwraps. Women began to wear satin-lined headwraps to protect their hair as they sleep making the satin cap an essential part of their nighttime routine.  During the day, headscarves made of cotton, silk, and polyester fabrics became a popular fashion statement and a protective styling tool in the evening.

We watched Nina Simone, a soulful singer, embody sophistication and grace by adoring her hair in elegant scarves amid the Civil Rights Movement. Suppose that wasn’t enough inspiration for black women to embrace headwraps fully. In that case, we could undoubtedly highlight singers like Lauryn Hill, India Arie, and Erykah Badu for their influence in the fashion and music industry in the ’90s and early 2000s.

Iconic anthems have emerged to celebrate black women in their “natural” state and encouraged entire generations to embrace their spirituality, honor their roots and embrace their natural hair. Now, you’ll see women of color wearing headwraps worldwide, including in the workplace and church services. What once signified oppression in the U.S. is now a popular fashion statement.

Headwraps as a Cultural Monument

Although headwraps have a long, complicated history in the U.S., we have reclaimed the traditions of our ancestors and made the art of head wrapping a crown of glory. Headwraps will forever be a significant cultural monument. What a joy to partake in such a beautiful custom. Headwraps represent our unique style, resiliency, and regality. So, the next time you wear your crown of glory from Royalteewraps, we hope you feel spiritually connected to the God of Israel (Luke 1:68-75), empowered, and remember our rich and deep history.

Danyel Dorsey, owner of BlaqButtaflii, LLC, is a servant-leader in the community, and founder of faith-based lifestyle brand Royalteewraps™. Danyel and Jessina are currently teaching women in the faith how to wrap their beautiful crowns with bold colors, unique fabrics, and styles; and producing “Do-it Yourself” and “How-to” tutorials on YouTube at Royalteewraps.