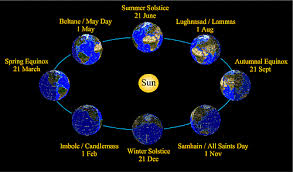 This blog is not intended to to judge or offend anyone who celebrates or choose to keep Christmas as the day of Christ’s birth. It is only to put factual truth concerning the day’s origin and just how it became apart of today’s Christian traditions. I believe when one has all the valid information concerning a particular subject, he or she will be able to make a more concise decision about that particular subject. It is with this mindset from which this blog is intended.

Now there are many traditions within today’s Christianity that are originally Pagan; however the paganism is in the background, buried under new meanings, being reinterpreted just to obscure them. The Arabs even did so with their Ka’aba, and with research we can see that; but when it is something we want to do, we go into denial. Ministers will say that since we do not intend to be worshipping the Sun now, that it is all ok. When a person chooses to believe in something, their heart follows after it. Even if it is a lie, or fantasy, it does not matter to them. It certainly is not good to have a zeal for anything without knowledge!

Christmas and Its Validity to the Word of God

Many believe that “Christmas ” is in the writings, with the stable, manger, star of Bethlehem, shepherds, and Magi visitation. Also, everyone is programmed to celebrate birthdays, so why not celebrate the birth of the most important person ever born? What I love about today’s technology is that through the internet, or information highway as it is called, there is virtually nothing that you cannot find or research the origin of. Even so, keep in mind all knowledge is not valid knowledge.

There was no such term as “Christmas” until the 9th century. This day was the authentic, raw, and abominable Pagan festival of the winter Solstice: Saturnalia (also called Paganalia, the nativity of the sun). The ivy was considered the “sacred plant” of Saturn, so the custom has become an important feature of the “nativity ” all over the Earth. It was an ancient belief that the sun was slowly dying, because it was seen rising further and further to the south each morning. Solstice means sun-stop.

Christmas and Its Validity

By December 25th, (the ancient world solstice), it was recognized as beginning to turn northward, and said to “reborn”. It marked the time for a celebration that lasted for days; 12 to be exact from the 25th of December until January 6th (this is where the 12 days of “Christmas” come from). Carved idols were exchanged (dolls), people hung wreaths on their doors, or wore them around their necks (an echo of the symbol of Nimrod, the branch of a tree, twisted into a circle, symbolic of the shape of the sun and the annual cycle).

The Pagan festival of Saturnalia, the re- birth of the Sun and the Winter Solstice were customs that were celebrated at least 2000 years before Jesus was born. The heathen (or nations other than the Israelites), have never stopped the practice of these traditions, even when they became apart of what we call the early Christian church. Also, as more and more people were converted to this new sect called Christianity, the more their pagan rites were absorbed into it. All their observances of times, customs, dates and symbols remained in place; however the behavior and original meanings were camouflaged, even unto this day.

Here in Zimbabwe I had the pleasure of being on television with a native pastor who wanted to have a debate on the validity of Christmas. What I found amazing was that he acknowledged that he knew that the day was pagan and had absolutely nothing to do with Jesus! And also brought forth information proving that the early converts used their existing pagan customs to buffer a radical change to this new religion called Christianity.

Christmas and Its Validity to the Word of God

Although I gave all the facts that I have given here (even more facts on TV), I find that most of the people who claim to embrace the Bible as the true Word of God, are still today not willing to let go of the traditions of men and follow the commandments of God-what a travesty!!!

In conclusion I challenge you to please seek diligently what you serve because your very salvation depends on it.

May God Grant You Peace and Understanding In Jesus Name Amen!

The Day of the Lord the Second Coming and Armageddon

Bringing ‘Sound’ Back to the Doctrine in Zimbabwe