Hello My Brothers and Sisters Grace and Peace in the Mighty Name of Jesus: As I was pondering over my first radio lesson “Sound Doctrine Replaced by False Prophets“, I was wondering just what type of response would I get because there are so many people who are so so dedicated to these preachers who are fleecing them every week.

They love these preachers so much that the preachers can even auction off their socks shoes and all of their clothes for thousands of dollars…and the unfortunate reality is that the people would buy them!!! With this apparent truth before me, I wondered just what type of contention I would be getting myself into tonight. As fate would have it, I picked up a Zimbabwe Herald newspaper, and turned to the second page.

The headlines read, “The President lashes out against False Prophets” (you can read the article here). The article spoke a recent funeral that he attended and the remarks that he made at the funeral. He stated, “Some people claim to see things in advance but are instead false prophets.” “There could be some who we can say God gave them powers of prophecy, but these are very few,” said the President.

He went on to say, “…also in some churches you hear that a husband and his wife are prophet and prophetess.” The President said there were too many people who claim to be Prophets in Zimbabwe, yet in the Bible there was not that many. He said some Pentecostal leaders were extorting their parishioners by making it mandatory to give to them. President Mugabe said that it is important for Christians to be bound by The 10 Commandments.

With this declaration from the President of Zimbabwe, my confidence and faith in giving this lesson on False Prophets soared to an all-time high!!!I just finished the interview about a hour ago, and I tell you the response was overwhelmingly good. The calls were coming in with people praising God and thanking him for someone who had the courage to stand against the falsehood that is totally engulfing Zimbabwe.

Callers also stated, how they were sick and tired of Ministers taking advantage of poor and needy people without caring about their Salvation. I was so glad that it was received so well. I am on schedule to do Part Two next week and looking forward to teaching this lesson.

Praise God in the Name of Jesus for His Mighty Works…Amen and Amen.

P.S.- As always thanks for your prayers, support, and your love-which without it I could not do this. I Love You All!

Psalm 1 Exhortation: the Righteous and the Ungodly

Songs for the Sabbath and The Problem is Me

Looking for something? Search it! Want to keep up with PreacherHead movements?

Addressing the needs of families impacted by COVID-19 in Riverdale, IL 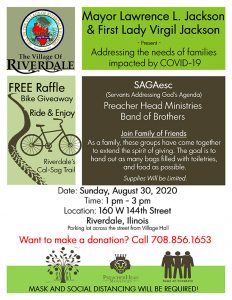